Persistence: How One Shreveport Family Navigated the Journey to an Autism Spectrum Disorder Diagnosis

Tears immediately well up in Icela Williams’s eyes when she begins to describe the past struggles with her four-year-old son, Addis. “I started to feel crazy,” she said, “everyone kept telling me, ‘don’t worry, he’s fine,’ but I knew something wasn’t right.” Addis was recently diagnosed with Autism Spectrum Disorder (ASD). This developmental disorder affects communication and behavior in 1 out of every 54 children in the United States. While ASD is common and symptoms can usually be detected around age 2, it can be difficult to diagnose. Like so many children and their families, Addis’s journey to receive a diagnosis was challenging.

“Around the 8 to 10-month mark is when I first noticed the differences between Addis and other children. He was still crawling on his belly while other children were pulling up,” shared Icela. Around age 1, Addis’s parents met with their pediatrician, who referred them for autism screening, however every clinic they called had at least an 8-month waitlist. But Icela didn’t let that stop her from trying to do everything possible to help Addis. Icela began Googling, searching YouTube, and reading everything she could find on ASD in an attempt to treat her son herself. Addis eventually began receiving speech and occupational therapy services around age 2. “(The sessions) were too short, expensive, and I felt like it wasn’t helping him a lot,” shared Addis’s father, Shalom Sahlie. “He needed more of it. 2 months later, we’re still doing the same thing.”

Looking for the right resources

As Addis grew older, his problems persisted, and the differences between him and his peers became more evident. “Walking up or down a curb was like climbing a mountain for him,” said Icela. “He choked a lot because he would put whole pieces of food in his mouth.” Addis also struggled behaviorally at daycare, screaming and acting out and eventually being asked to leave. Icela and Shalom remember that time as especially tough and challenging. “I thought, what am I doing wrong? Why can’t I help my child?” said Icela as she reflects on their journey. Addis’s parents describe being at their wits end. In order to authorize any ASD therapy, their medical insurance would required an official medical diagnosis.

There was hope for Addis to receive a diagnosis at the LSU Health Shreveport Children’s Center located at the School of Allied Health Professions. Icela and Shalom requested an evaluation and shortly after his third birthday in March of 2020, Icela and Shalom were contacted by the Children’s Center to begin the process. However, the Children’s Center, like the entire world, was affected by shutdowns due to the coronavirus pandemic. Dr. Michelle Yetman, Clinical Psychologist and Clinical Assistant Professor at LSUHS, and Mike McGill, Assistant Director of the Children’s Center and Speech-Language Pathologist, put together a robust plan to conduct Addis’s evaluation via telehealth. They coached Addis’s parents through setting up their home to mimic the clinic where evaluations are typically performed. Shalom remembers being very skeptical of the telehealth process. “We were nervous whether they were going to see everything that we see,” he said. “We were worried we’d have another door close in our face after 20 doors have already closed,” added Icela. 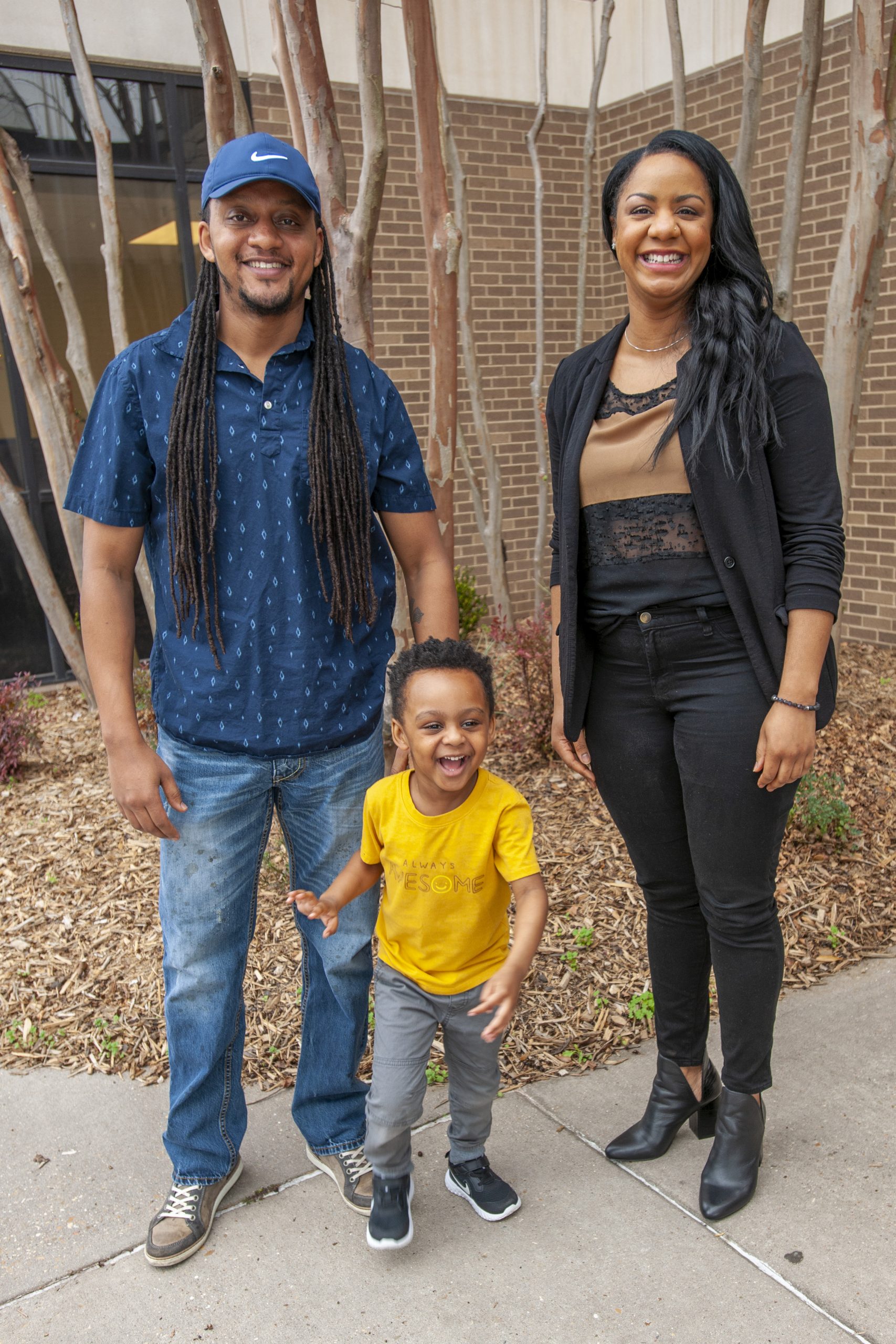 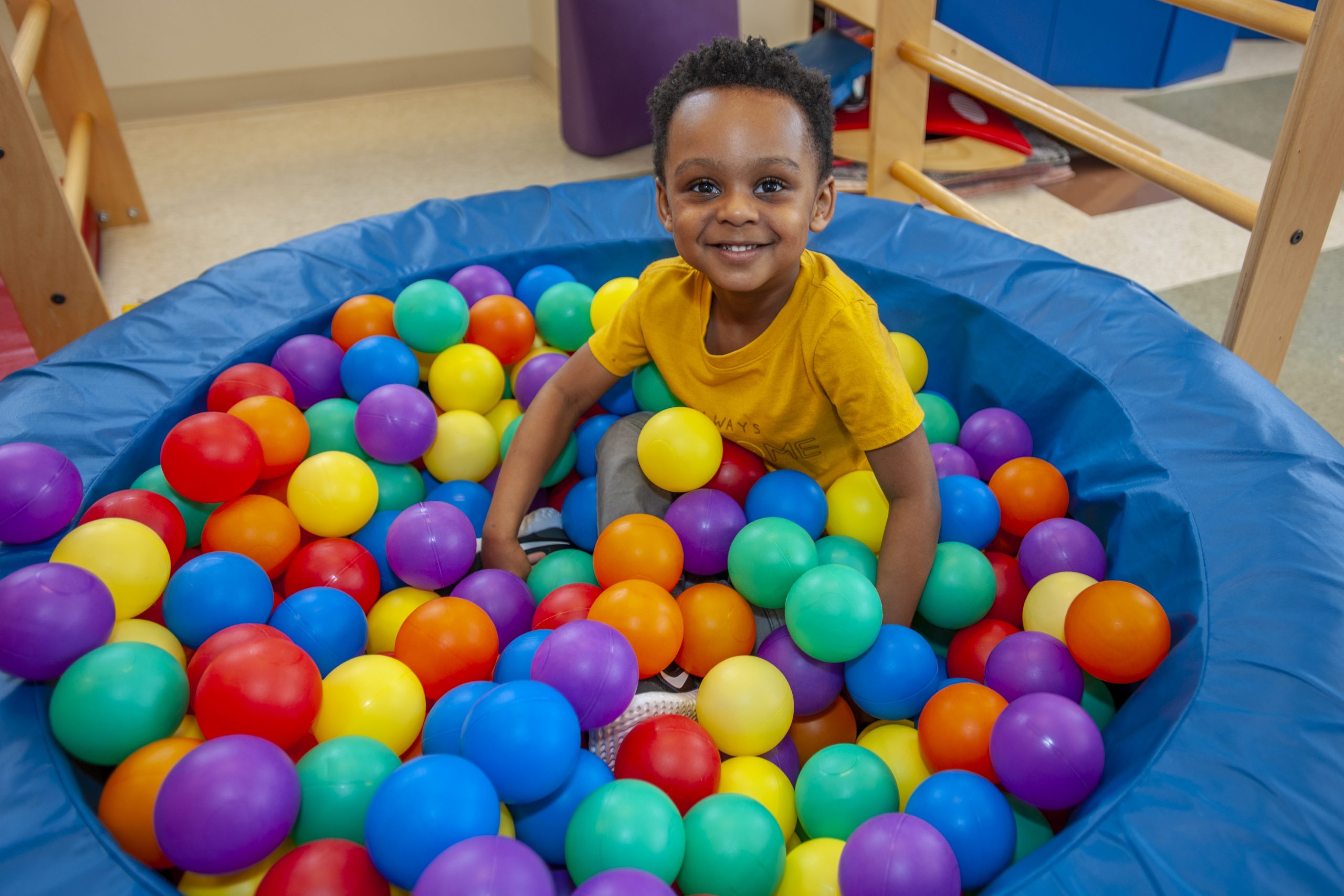 But Dr. Yetman did see Addis’s behavioral issues, and diagnosed him with Autism Spectrum Disorder, making him the first case diagnosed via telehealth at the LSU Health Shreveport Children’s Center. Icela and Shalom were elated to finally have a diagnosis and for Addis to begin treatment.

Once the clinic reopened for patients in August 2020, Addis began Applied Behavioral Analysis (ABA) Therapy at the Children’s Center for half a day, five days a week. ABA therapy is an intensive therapy for children with ASD designed to increase language and communication skills, improve attention, focus, social skills, memory, and academics, and decrease problem behaviors. “ABA therapy is a highly effective, evidence-based treatment for ASD with 30 years of research behind it,” said Dr. Yetman. After just two weeks of therapy, Addis’s parents could see a tremendous improvement. “(The Children’s Center) was the first place Addis went where I wasn’t constantly worrying about him struggling or acting out,” said Icela. “We went from having tantrums all the time to hardly at all very quickly.”

“My family knew we wanted to do something to positively impact the lives of children here in our community,” said Jon Q-Petersen. “I was already familiar with the standard of care through the School of Allied Health Professions at LSU Health Shreveport and knew that supporting the Children’s Center would allow it to become a self-sustaining resource for children and their families in this community.”

The Q-Petersen family was struck with tragedy in 2014 when they lost their granddaughter to Trisomy 13, a rare genetic disease, at her birth. Through their grief the family felt clearly called to support a children’s initiative. “As a family, that really shook us to our core,” said Mr. Q-Petersen. “We wanted to do something to honor her.” Additionally, one of Mr. Q-Petersen’s grandsons began showing signs of developmental delays. “We became shockingly aware of how few resources there are for children and their families in Shreveport.”, said Mr. Q-Petersen. The Q-Petersen family hopes to eliminate the gap in high-quality healthcare for children who cannot travel or have limited resources in the Shreveport community. “We are excited to see this program launch.”, said Mr. Q-Petersen. “There are so many children right here in Shreveport who need this kind of care.”

The Q-Petersen’s gift has opened the door for the Children’s Center at LSU Health Shreveport. “The Children’s Center can now be a ‘one-stop shop’ for children with behavioral disorders and their families in our community,” said Dr. Yetman. Many children with ASD also require other therapies like speech, occupational, or physical therapy. The LSU Health Shreveport School of Allied Health Professions offers all of these services, relieving a heavy burden on families who typically receive these services from multiple providers. “We know early intervention is key when it comes to treating autism spectrum disorder,” said Dr. Yetman. “Demand for therapy is so high in our community, and we want to help as many families as we can.”

On a mission to serve families and children

The mission of the LSU Health Shreveport Children’s Center is to maximize the potential of children, infancy through 15 years of age, throughout the Ark-La-Tex by providing diagnostic assessment and treatment, supporting and educating families and service providers, and offering technical assistance and outreach to community agencies. “The Children’s Center is the premiere diagnostic center for children with ADHD, autism, and other behavioral disorders,” said Dr. Suzanne Tinsley, Assistant Vice Chancellor of Institutional Advancement and Assistant Dean in the School of Allied Health Professions. “We are incredibly grateful for the Q-Petersen’s generous gift to our center, as we hope this is just the beginning in expanding our resources available to the children and their families in our community.” 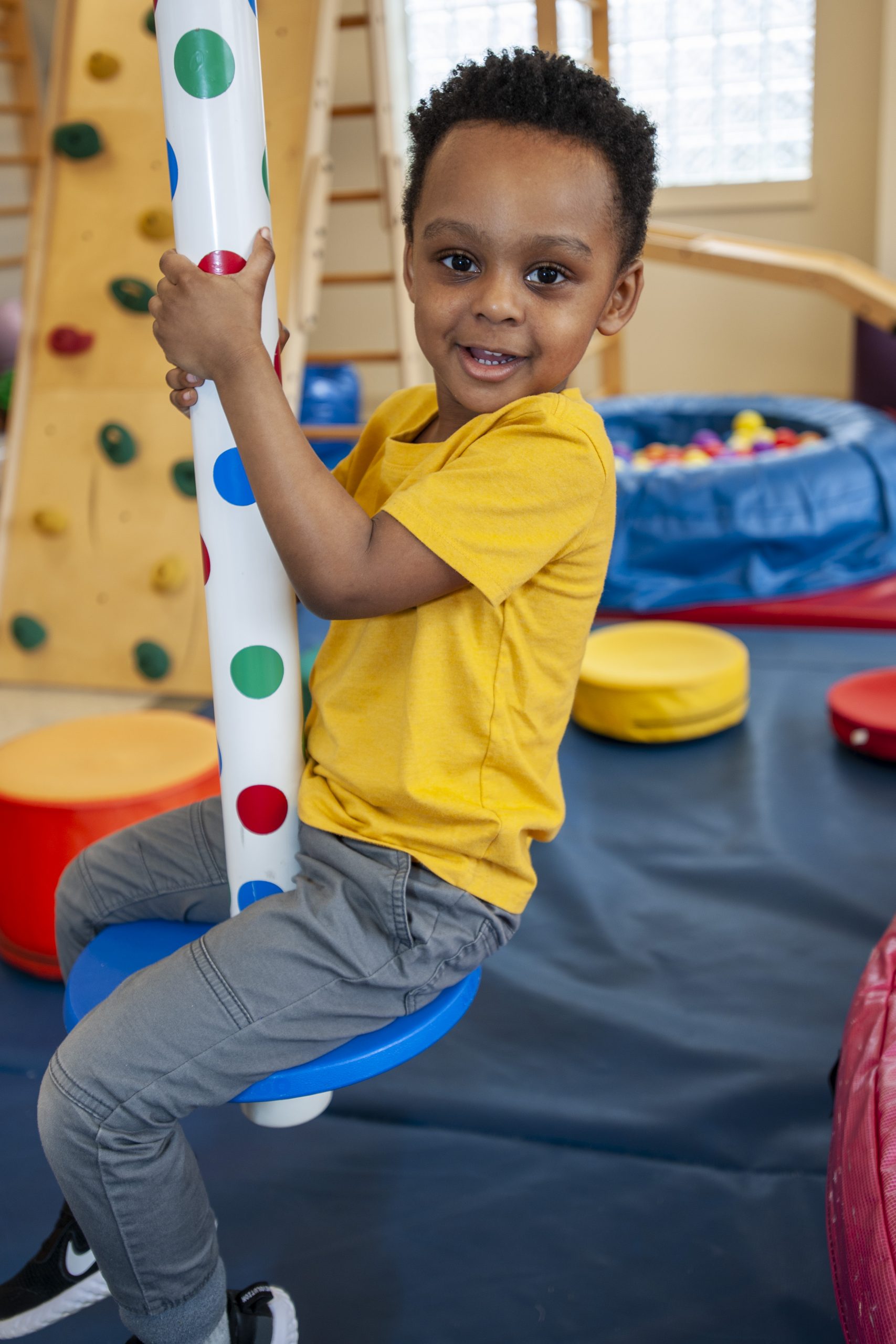 With Addis recently turning four years old in March, he will be off to preschool in the Fall of 2021, confident and prepared. “The future is so bright for him,” said Icela. “We truly did not know where to turn for Addis, so we are thankful for the phenomenal care he has received at the LSU Health Shreveport Children’s Center.” To other families who may be struggling with a child with ASD, Icela says simply to “Just keep pushing on. Have persistence and it will pay off.” 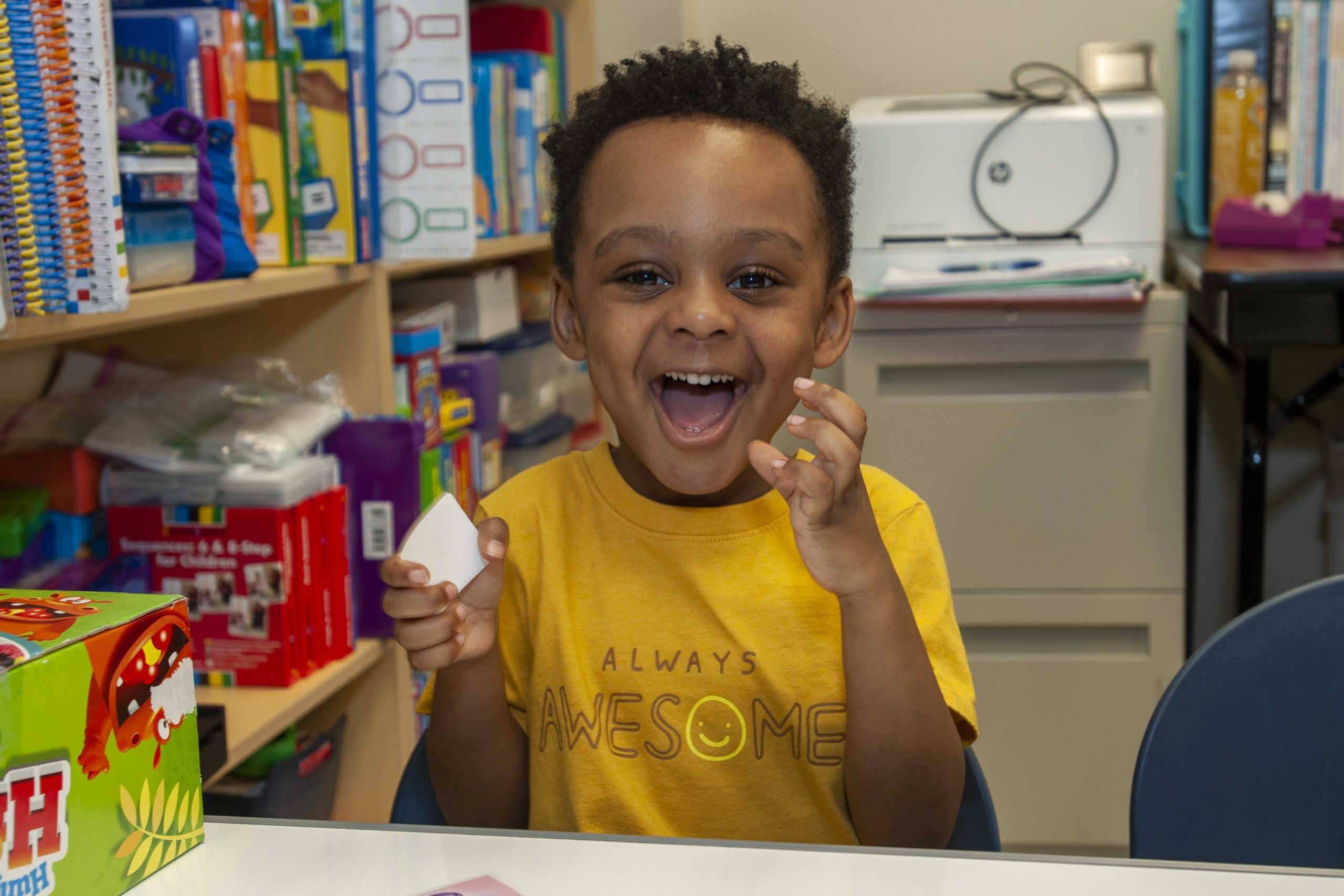 Make a Gift
We use cookies on our website to give you the most relevant experience by remembering your preferences and repeat visits. By clicking “Accept All”, you consent to the use of ALL the cookies. However, you may visit "Cookie Settings" to provide a controlled consent.
Cookie SettingsAccept All
Manage consent